Brachycephalic dogs: What you need to know - Heene Road Vets Skip to content

Brachycephalic dogs: What you need to know

​Brachycephalic dogs have shortened faces and noses, such as Pugs, French Bulldogs, Boston Terriers and Shih Tzus. The brachycephalic breeds are becoming increasingly popular and it’s not difficult to see why – they are great characters and make wonderful pets.

However, there are several common health problems associated with their short noses, the most important being difficulties with breathing.

Common problems that ​brachycephalic​ dogs often have from a young age include:

These issues over time can lead to the development of other problems:

Some of these issues can be improved by surgery, which can then help to avoid development of further problems. If needed, surgery is generally best carried out relatively early in life, at around 6-8 months old, and can be done at the same time as neutering. Sometimes significant breathing issues do not develop until much later in life, but surgery at this stage can still be very helpful to improve quality of life and limit the progression of problems such as collapse of the larynx.

Despite the risks, airway surgery in brachycephalic dogs gives a good chance of improving their quality of life and reducing the problems likely to be encountered later in life. 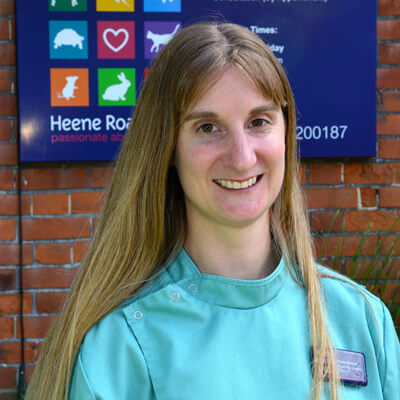 Fiona French, as well as being an RCVS recognised Advanced Practitioner in Small Animal Surgery, has a particular interest in airway surgery on brachycephalic dogs and is very experienced in this area, and our nursing team are very familiar with caring for these dogs before, during and after their surgery. If you would would like Fiona to assess your dog and discuss any concerns you may have, please contact the surgery to make an appointment with her.

Heat Stroke in dogs Dogs have very few sweat glands; instead they rely on panting to cool themselves down. Heatstroke occurs when they cannot lose

‘Fear Free‘ is a movement started in the USA, with the mission: ‘to prevent and alleviate fear, anxiety, and stress in pets by inspiring and educating